The Zeppelin LZ-114 (German Navy tactical number L-72) was given to France in 1920, one of 3 Zeppelins transferred to France as war reparations. Upon delivery of the LZ-114, France recommissioned her the "Dixmude".

The LZ-114 was scheduled for completion in 1918, but in September that year the German Admiralty ordered design changes to increase the airship's flight ceiling. That meant a significant construction delay to add one more hydrogen gas cell, and alter the power plant design from 7 engines to 6. But WW I ended before the LZ-114 was completed. She finally flew on July 9, 1920 and was handed over to the French on July 13th after being flown from Friedrichshafen to Maubeuge, France. It was then she was christened the Dixmude. She was flown by her French owners to the French naval air base at Cuers-Pierrefeu near the port city of Toulon to begin operations with the French Navy.

Specifications of the Dixmude:

Upon delivery in July, 1920, Lieutenant du Plessis de Grenédan was given command and 40 men selected to study and learn the operations of the airship. On August 11, the Dixmude is flown to Cuers-Pierrefeu, landing on August 12th after remaining airborne all night due to delays in landing operations. The Dixmude was towed into the hangar at Cuers-Pierrefeu, and the hydrogen pumped out of the gas cells.

(Note: It appears that the French Navy was not quite prepared to receive the Dixmude for operations. Photos of the Dixmude arrival at the Cuers-Pierrefeu Navy Air Field show an incomplete airship shed. It seems likely that the Dixmude was temporarily "mothballed" (so-to-speak) so facility construction could be completed. The two airship sheds needed to be finished and it is likely that the hydrogen generation plant was also not ready for operation when the Dixmude arrived. Planning was also going on for the arrival of a 2nd airship, the LZ-121 "Nordstern" which would be re-christened the "Mediterranee" in June 1921 and operated in a French civilian role. The French Navy took possession of the Mediterranee in August, 1922.)

Stored in the hangar, the Dixmude was not prepared for flight again until September 2, 1921. Unfortunately, during the year of storage, the hydrogen cells had deteriorated and would no longer retain the hydrogen. Commander du Plessis persuaded the Navy to prepare new hydrogen cells which took 2 years because the French had to learn how to make them themselves and on August 1, 1923, she began operational tests.

On December 18, 1923, the Dixmude took off from Cuers intending a long duration flight. The first part of the mission involved an exercise with the squadron. 50 men were on board, the crew and 7 passengers.

The following is borrowed from GlobalSecurity.org:

The Dixmude left Toulon on Tuesday, December 18, with the expectation of reaching In Salah, about 930 miles southwest of Tunis, by 4 PM of the following day. Here the airship turned, and at about 9 AM Thursday, December 20, reached a point somewhat south of Biskra. She had now been 50 hours in the air. Then, as the west wind was increasing, her course was changed to the northwest, toward the city of Algiers, instead of along the coast toward Tunis. Her ground-speed diminished as the wind continued to increase. Making an average speed of about 25 miles per hour, she reached Bou Saada at 2:30 PM Here she turned toward the south and at 6:30 PM was again south of Biskra. She now remained nearly stationary, apparently with the intention of riding out the storm.

The situation was evidently getting serious. Since the engines were probably no longer in condition to attempt to cross the sea in the face of the storm, the correct course was doubtless to work the airship gradually southward, with her head to the west wind, in order to avoid the storm center and leave more land behind her to the leeward against the danger of being driven back, since the wind at Bou Saada was blowing directly toward the sea. The commander proceeded accordingly and, if nothing had gone wrong on the airship, might have been able, by the next day, to turn north again toward Algiers. According to radio messages, there was still sufficient fuel for two days, though this estimate was probably based on not running all the engines at the same time.

The situation was not reassuring, however, since there were mountains east of Biskra with peaks rising to 7700 feet, into which there was danger of being driven, in case the wind should increase or the engines fail to function. In this, event, it would be necessary to attain a higher altitude by discharging ballast, in order to clear the mountains by night and in the clouds. At higher altitudes, however, the velocity of the wind was doubtless greater, so that the airship would be carried east still more swiftly. Did the Dixmude have enough free ballast for such a case? Hardly, since such an ascent would have necessitated the discharge of 40,000 to 44,000 pounds of ballast at the time of taking off and the fuel thus far consumed was perhaps only 22,000 to 26,000 pounds.

Some seven hours later, around 2 AM, Friday, December 21, the Dixmude fell into the sea off the coast of Sicily.

Map of the estimated flight path of the Dixmude on its final journey. Photo credits: From a presentation
"Histoire succincte d’un Zeppelin Français, Le Dixmude"
(Click on the image for a larger version.)

The last radio message received from Dixmude was sent at 2:08 AM, December 21st. The French government, unwilling to admit the likelihood of the airship's loss suppressed reports that witnesses had seen a flash and glow in the sky off the coast of Sciacca, Sicily and issued its own series of false reports of rumored sightings of Dixmude, suggesting that it had been blown inland over Africa.

But railway workers in Sciacca had been preparing to take out a train due to leave at 2:30 AM when they witnessed the sky to the west light up and the lingering glow sinking out of sight behind a hill. Other witnesses that morning, watching the thunderstorm, also saw a flash of lightning in a cloud, also followed by a red glare inside the cloud and reportedly four burning objects falling from the cloud.

French officials held out hope for several days but all hopes of saving the ship or its crew ceased when on December 26th the body of the commander, Lieutenant du Plessis de Grenédan was found in Sicilian waters in the net of fishermen. He was identified from identity papers in his pocket. Authorities noted his watch had stopped at 2:27. Gruesomely, human body parts were found but only one other identifiable body was found.

The exact cause of the accident was never determined. The French government after this disaster abandoned all work with rigid airships. You can learn more about the accident in The Loss of the Dixmude, part of which is quoted above.

As mentioned, when the Dixmude arrived at Base Aeronavale (Naval Air Base) Cuers-Pierrefeu in July, 1920, only one of the two airship sheds had been built and it was not quite complete. (The 2nd shed was completed in 1922.) Preparations for airship operations at Cuers-Pierrefeu were seemingly made in haste. The two airship hangars had to be constructed from materials salvaged from existing, smaller sheds.

And here, we see the Base Aeronavale Cuers-Pierrefeu in September 1944:

There is much to see in this close-up! Just look at the roof profiles - they are reversed. Look at the ground structures - they are also reversed! While the sheds are the same width, they appear to be constructed from four separate sheds as no one shed at the time would have been long enough to hold an airship as large as the Dixmude which, at the time, was the largest airship in the world.

Here is the approximate location of the hangars (east is to the right). So the Dixmude was flown not far to the east of the hangars. The sheds were centered at (Lat Lon) 43.246262 006.117858. (Note: Google Map has pixelated overhead imagery of the airfield. You may need to find an older overhead view of the Cuers-Pierrefeu airfield as shown here to visualize where the hangars once stood):

Here is a marvelous 1923 video clip of the Dixmude at Cuers-Pierrefeu. (So much to see in this nearly 100 year old video!):

Monuments to the Dixmude and her crew

There are at least FIVE monuments/tributes to the Dixmude in TWO countries to cite. In France, I have found three, and in Italy (Sicily), two.

A large memorial is in the town of Pierrefeu-du-Var just a mile and a half south-east of where the Dixmude would have been observed in the sky over the Base Aeronavale (Naval Air Base) Cuers-Pierrefeu. It is located, appropriately, on the west side of the town, on the Boulevard Henri Guéin: 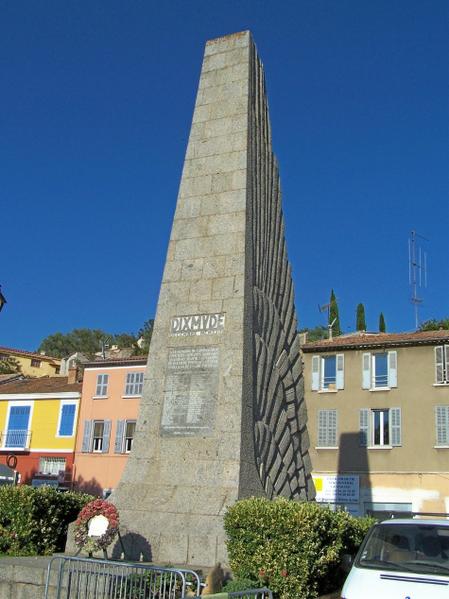 The second is obscure and has a sordid history. It was first placed and commemorated on the Base Aeronavale (Naval Air Base) Cuers-Pierrefeu, appropriately near where the valiant crews worked and near where the two hangars once stood. It was located at (Lat Lon): 43.247395 006.115479. It looked like this:

The nice commemorative plaque is seen here linked to aerosteles.net due to copyright: 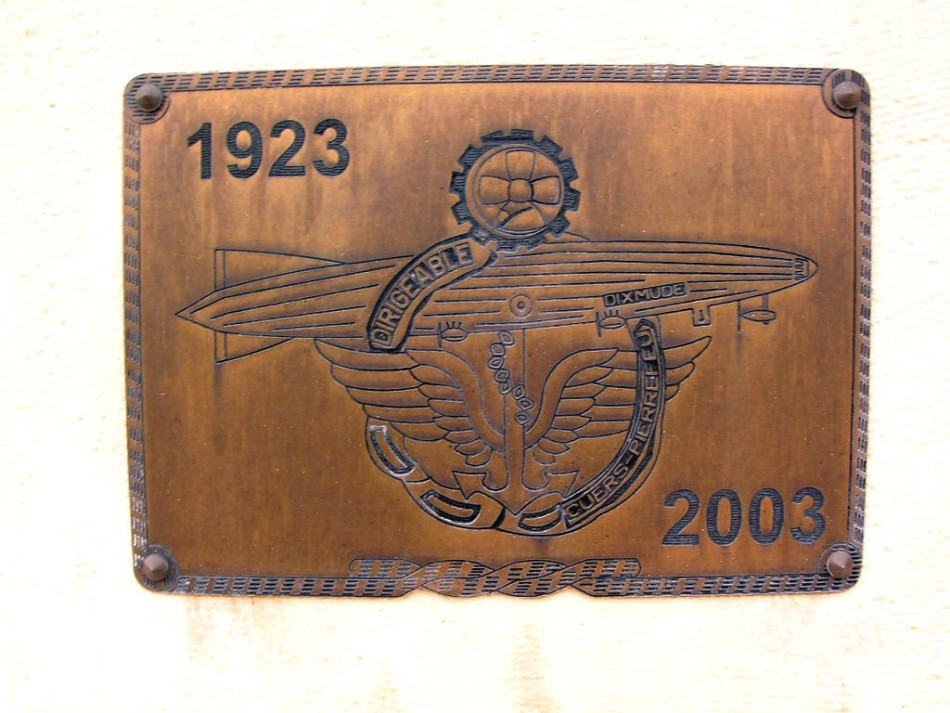 But at one time it was also located somewhere else on the base:

Then in 2010 it was physically moved from Base Aeronavale (Naval Air Base) Cuers-Pierrefeu to the side of a highway in a spot where it is now accessible to the public, but completely unknown! Here is what it looks like now. Notice the commemorative plaque is gone: 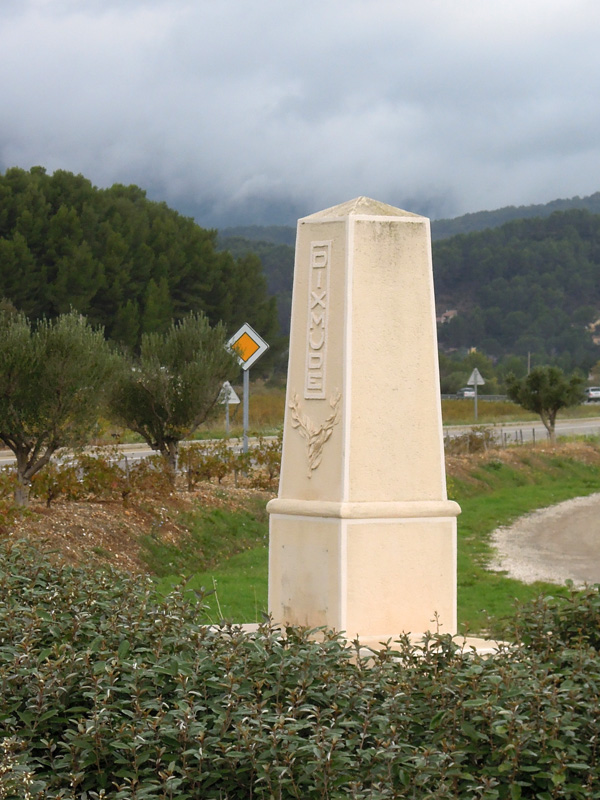 On board the Dixmude was the ship's doctor, Léopold Henri Marius Pélissier. He died with the rest of the crew on that fateful trip in December, 1923. He is memorialized in his home town of La Palme, at the entrance to the entrance to the old cemetery at (Lat Lon) 42.969900 002.991385: 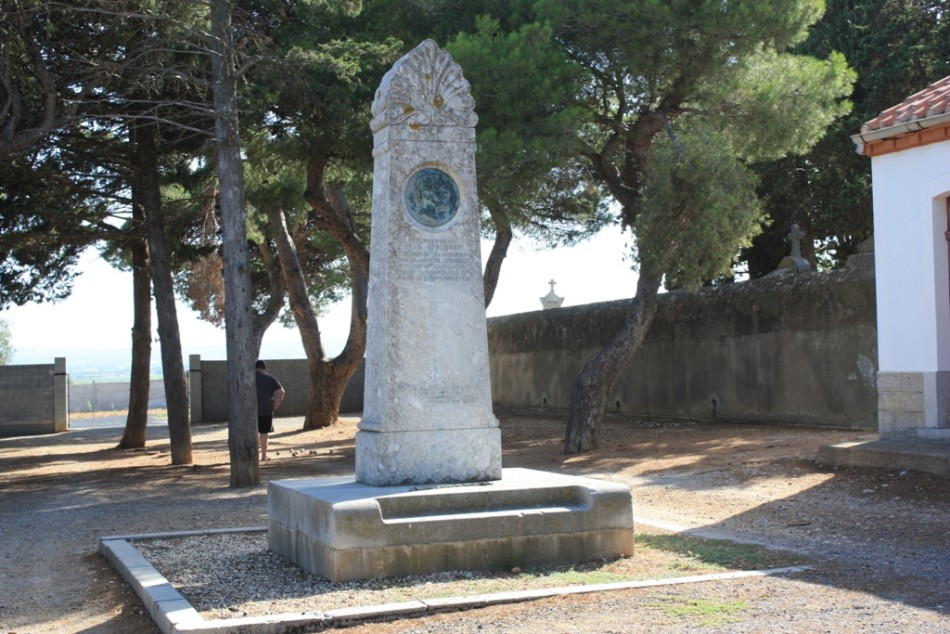 The Dixmude disappeared off the coast of Sicily, in the waters near the town of Sciacca. There are two monuments there dedicated to the Dixmude. 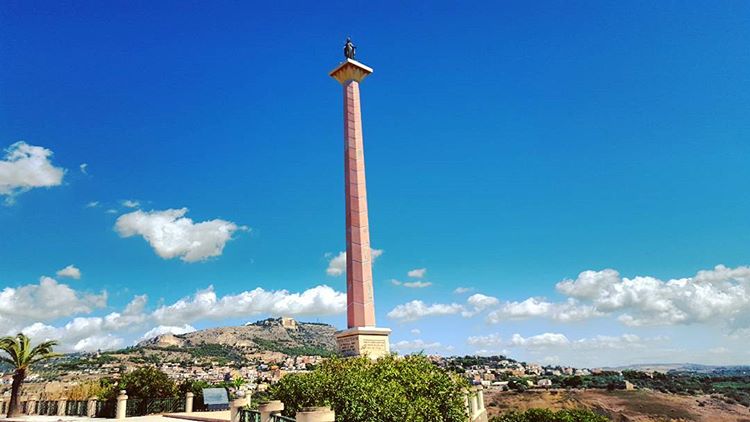 Also in the town of Sciacca, Sicily, is a memorial in the Cimitero Comunale di Sciacca cemetery. (It is also known as Sciacca Cemetery, or Sciacca Municipal Cemetery.) A fine, stone monument is located there, however, it has defied my attempts to pinpoint exactly where the monument is located inside the cemetery. The entrance of the cemetery is at (Lat Lon) 37.519510 013.087262. This is the only photo I have seen of the monument:

Thank you for viewing this page! I enjoy actually finding the locations where airship activity took place. Though the Dixmude was short-lived, it had an amazing and nearly lost history.